Even though he is no longer in office, former President Donald Trump still faces an impeachment trial in the Senate.

Trump is being accused of inciting insurrection after Capitol Hill was stormed on January 6th while Congress was debating the results of the Electoral College.

Mississippi’s U.S. Senator Roger Wicker issued the following statement Monday after the House of Representatives delivered its article of impeachment against Trump.

Impeaching President Trump is a mistake. The effort to remove a President who is no longer in office raises serious constitutional questions and threatens to delay national healing. This article of impeachment was rushed through the House of Representatives shortly after the Capitol riot without hearings or any careful consideration of evidence or precedent.

A second impeachment trial is sure to inflame partisan tensions and could poison the cooperative spirit we need in a 50-50 Senate. I fear it will also bring more reproach on Congress’s solemn impeachment power, which should be used sparingly and with sober deliberation. The Senate has important business to do and should not be held up by a pointless and divisive delay.

I will vote to dismiss this article of impeachment against President Trump.

The impeachment trial is set to begin in early February. 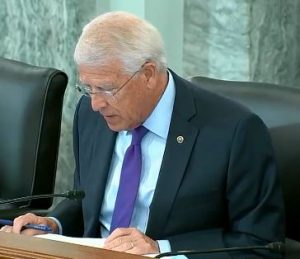