Mississippi’s cases of COVID-19 continue to rise and medical officials are worried.

Saturday, 1,972  new cases were reported, becoming the state’s largest one-day increase since the beginning of the pandemic.  During a press conference Monday, officials with the University of Mississippi Medical Center spoke out with their concerns as Thanksgiving approaches.

Dr. LouAnn Woodward, Vice Chancellor for Health Affairs and Dean of the School of Medicine at UMMC said a statewide mask mandate is needed.

Woodward said, “I think, that from the standpoint of certainly myself, in my own opinion, and the leadership here at the medical center, we do very much believe that we should have a statewide mask mandate.”

Woodward said there are two reasons it should be enacted.  “Even with a statewide mask mandate, not 100% of the people are gonna comply – you’ll still have people who don’t comply.  But, I think that we have some reasonable evidence to believe that the county-by-county approach is not working. It may be helping, but it’s certainly not doing what we need it to do.  It is not turning these numbers around for us.”

As of November 16th, Governor Tate Reeves had placed 22 counties under a mask mandate and stricter social distancing guidelines.

Woodward continued by giving the second reason why a statewide mask mandate should be put in place.  “The other reason is, with the Governor being the highest level state official in the state of Mississippi, I think that sends a big signal for that position to say we are at a critical point people, we need to have a statewide mask mandate.  That is my opinion from a medical standpoint.  That sense of urgency is rapidly becoming much more intense and powerful.  What we have been doing hasn’t turned us around.”

Early Monday, Governor Reeves announced he will host a Facebook Live event at 2:30 p.m. on Tuesday regarding vaccines and distribution.

The post UMMC official says statewide mask mandate needed: “What we have been doing, hasn’t turned us around.” appeared first on News Mississippi. 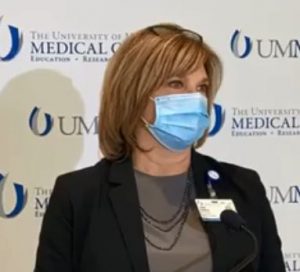