In this afternoon’s press briefing, Dobbs provided the accurate numbers while apologizing for the “erroneous” numbers that were prematurely and inaccurately released this morning, citing that the true number of cases from the department’s most recent report consists of 2,746—nevertheless the state’s highest one-day rise since the onset of the pandemic.

“I would like to apologize for the erroneous numbers we released this morning,” Dobbs said. “There was a data field issue where we didn’t get birthdays for many of the patients, and it interfered with our automated portion of our de-duplication algorithm. When we did our quality control measures by hand thereafter, we did find the error and went back and corrected that, but still, 2,746 is a phenomenal number.”

Wednesday’s report brings the state’s total number of positive cases up to 170,672. With the confirmation of 25 additional deaths, 4,041 Mississippians have now passed away from the virus.

Overall hospitalizations continue to rise well beyond the previous peak of the summer months. Back in June, Dobbs stated that for every 1,000 new cases, they expect around 170 hospitalizations, meaning that today’s caseload signals continued challenges ahead for the healthcare system.

Governor Tate Reeves also announced his newest executive order, which places 61 of the state’s 82 counties under a mask mandate while placing further restrictions on both indoor and outdoor gatherings.

On Tuesday, Dr. Dobbs gave an update on the arrival of Mississippi’s first doses of the COVID-19 vaccine. While the state may have its first 25,000 doses by next week, he reiterated that now is not the time to let up.

“We want to bring as many people across the finish line as we can. I think there is a good chance that 1,000 more people can die between now and 2021. Those are people we can save. There are people who are going to be after that that we can save. We’ve got a vaccine on the horizon, and now is just the time to maintain patience,” he explained.

As of Monday, an estimated 136,627 Mississippians have recovered from the virus. 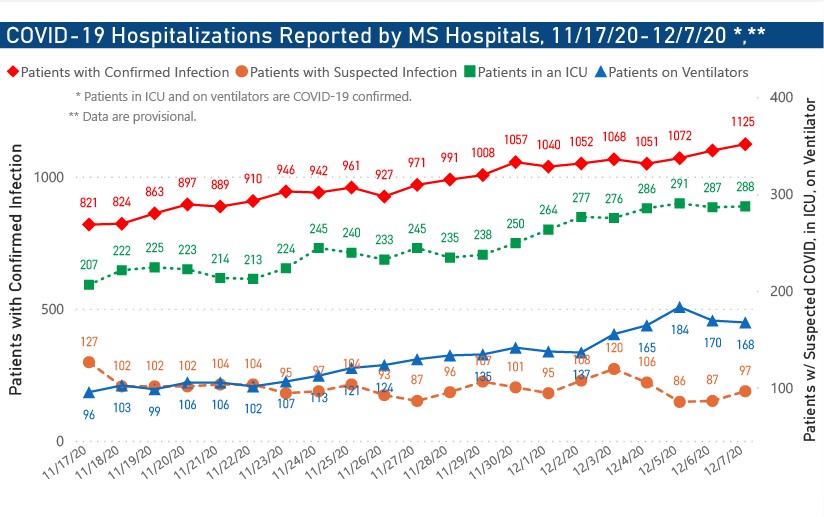