Following Monday’s introduction, “Coach Prime”, as he requested to be called, met the media for the first time as the head football coach at Jackson State this morning to offer some insight into what the Tigers will look like under his watch.

“Smart, fast, tough and disciplined. We play fast, we play physical, we’re disciplined at all times, and we have fun doing what we do,” is the way Sanders described the style of play you can expect to see when the Tigers kickoff their season in the spring of 2021.

While this will be the Pro Football Hall of Famer’s first collegiate coaching job, he has an unquestioned knowledge of the game. Sanders explained that his preparation for a career in coaching began during his playing days while working “hand in hand” with his coaches to develop gameplans and schemes.

With a spread-style offense, Sanders will emphasize movement and quickly getting the ball in the hands of their playmakers.

He also outlined his defensive philosophy with a Deion Sanders-like flare to it.

With all of that said, Sanders wasted no time in offering some of the nation’s top talent at both the high school and JUCO levels throughout his first day on the job. Attracting talent was a primary focus during Sanders’ introduction Monday and he followed up on that today.  He expressed confidence in the university’s facilities and resources but explained that there needs to added exposure for HBCUs nationwide.

“ I don’t see anything limited about [the facilites]. This looks really, really good. It is astounding,” the new coach said discussing his first impressions of JSU.  “The resources with allowing the ‘elite players’ to understand what HBCU’s occupy is a whole other thing. Playing on ESPN2 and not ESPN, not being invited to bowl games when some teams that are 6-5 or some teams that are really not worthy, I want to know why that is not on the table for HBCUs. When I say I want to level the playing field, I want to level it in every aspect of the word. I just want our kids to understand that there is a navigation system that leads us to the NFL…You can get to where you want to get to and reach your goals from JSU.”

The Tigers do have several key contributors returning from a season ago, including QBs Derrick Ponder and Jalon Jones along with leading rusher Keshawn Harper. Defensively, LB Keonte Hampton is back after leading the Tigers in sacks with 4.5 in 2019.

As for who will be joining Sanders on the sidelines, the coaching staff has not yet been announced, but he did state the staff has been assembled. While there were rumors of fellow Hall of Famer Brett Favre joining the staff, Sanders squashed that by stating that the Mississippi native “will remain in the best friends category” for now.  According to WAPT‘s Joe Cook, Sanders has put together a star-studded staff.

Just like he did during his football and baseball playing careers, Sanders will continue to wear multiple hats. After recently joining Barstool Sports, Sanders expressed confidence in the fact that he can succeed while juggling multiple responsibilities.

For the time being, the “main thing” is serving as the offensive coordinator for Trinity Christian High School in Texas where he’ll finish out the season. His son, Shedeur, is the team’s QB and a highly-coveted prospect in the 2021 recruiting class.

Although he didn’t initially see himself getting into this line of work, Sanders described the coaching at the youth level as “not adequate” which forced him into action.

As for his belief that he can deliver a winner to Jackson State, Sanders gave a response that should come as no surprise to anyone that watched the all-time great play.

“Confidence is my natural odor, let’s understand that.” 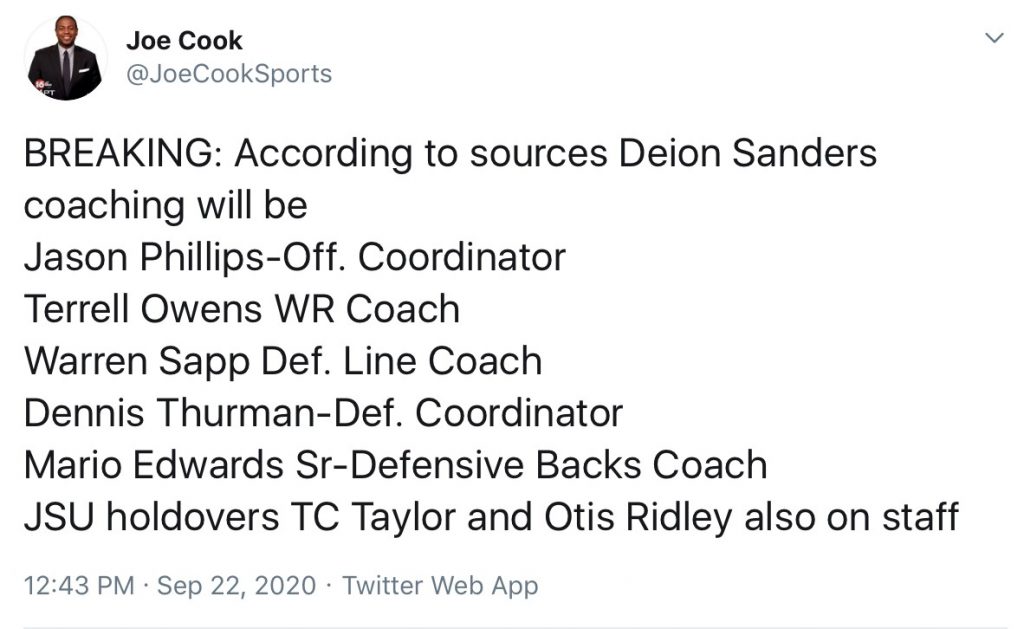